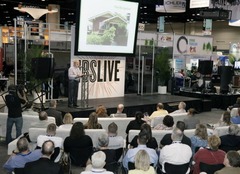 Upbeat housing forecasts, including a projected 22-percent increase in single-family housing starts for 2013, made for a giddy International Builders' Show in Las Vegas. Our editors and analysts were among the 60,000 or so attendees there checking out the latest products, building practices, and technologies from more than 900 exhibitors. It was a lot to take in. But here are five trends we expect to see more of in 2014, when the Builders' Show returns to Vegas, joining forces with the Kitchen & Bath Industry Show for what promises to be an even bigger bonanza.

Staying connected. Connectivity was the biggest buzzword of the show, with more manufacturers touting technologies that let consumers interact with products like they've never done before. GE, which returned to IBS after a brief hiatus, showcased 8,000-watt and 10,000-watt standby generators that can be monitored from a smart phone or computer, providing peace of mind if a power failure strikes while you're out of town. We were also impressed by Schlage's Touchscreen Deadbolt Lock and Honeywell's new programmable thermostats, all of which can be controlled remotely.

Offering a different kind of connectivity, we also saw a wide array of glass walls that allow for a connection between the indoors and outdoors. Kolbe's lift-and-slide door systems, for example, can stack or pocket up to ten door panels for 60-foot panoramic views. The manufacturer also displayed a massive floor-to-ceiling corner unit with electronically operated awnings. NanaWall, which started the folding/sliding glass wall category 25 years ago, had a folding wall unit with a U-value of .17, equal to Europe's toughest building standards and high-impact hurricane systems for panels up to 10 feet high.

Smart Appliances 2.0. The rise of electronics-based connectivity has sparked a rebranding of the smart appliance. For the decade or more that this concept has been around, the messaging has been largely centered on energy savings: This smart dishwasher or water heater or clothes dryer will communicate with your utility company and operate when electricity rates are lowest. Trouble is, the smart grid-enabled time-of-use rates that would make these savings possible aren't available to most Americans, so consumers haven't really gotten excited about smart appliances.

And so, we're now seeing a different branding of smart appliance technology, with an emphasis on connectivity and convenience, including a Wi-Fi enabled wall oven from GE that can be controlled from a smart phone. At the Consumer Electronics Show that took place in Vegas earlier in the month, we also saw a Wi-Fi wall oven from LG and a four-door refrigerator from Samsung with an LCD display that lets you share recipes and photos online

Made in the USA. A number of companies played up their red, white, and blue bonafides. Armstrong flooring, for example, promoted its domestic hickory and oak lines, an option to African mahogany and other exotics. Cambria was quick to point out that it's the largest U.S.-based maker of quartz countertops; with its new product launches at the show, the Minnesota-based manufacturer now offers more than 100 designs. Formica, meanwhile, is celebrating 100 years of business in the U.S. with a new Anniversary Collection, in cool graphic patterns that evoke a mid-century modern spirit. GE made clear that it's new hot water refrigerator is manufactured in Louisville, Kentucky and its Wi-Fi wall ovens in Lafayette, Georgia.

Unabashed luxury. Products that might not have played well during the depths of the downturn were on full display. Saunas, for example, are apparently making a comeback, including $5,000 options from Finlandia Sauna that can be added to a master bath or pool area. Elevators are on the rise as well, especially in well-to-do multi-generational homes where one or more members might have trouble with stairs. Residential Elevators Inc. installs units clad in mirrors, leather, and wood, starting for $20,000.

In terms of high-end with gee-whiz value, we liked the electric glass door from Simpson Door Company, which can go from clear to opaque with the flip of a switch, starting around $2,000. And everyone was talking about Kohler's singing $200 singing showerhead, the Moxie, which can stream music from your computer or Mp3 player. Then there was the Brew Cave, an $8,000 walk-in fridge that can store over 30 cases of beer and four kegs, and also features a draft beer dispensing system.

Cheap thrills.There weren't too many products for $20 or less that might actually help homeowners, but one exception is Leviton's wall outlet with a pair of built-in USB ports, eliminating the need for most chargers. Instead, you can simply plug your smart phone, tablet computer, or e-reader directly into the wall. We also liked Prazi's StirWhip, a $15 drill attachment that's supposed to let you mix or stir paints, compounds, and even concrete with minimal strain on the motor.