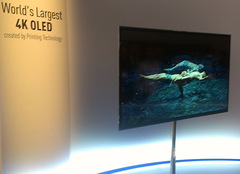 If you've been following our CES blog, you may have noticed that in my previous post about Panasonic's TV lineup—written immediately after the Panasonic press conference yesterday—I noted that the company didn't have any announcements about OLED TVs, a new technology touted by several other major brands.

Apparently I wrote too soon. It appears that, in order to inject some additional thunder into the keynote delivered by Panasonic president Kazuhiro Tsuga this morning, the company held back the information that it would be showing a 56-inch 4K OLED TV in its booth, which it claimed was the world's largest 4K OLED set.

As with the Sony model, a prototype, there's very little info available about Panasonic's 4K OLED TV, such as price and availability. Still, in the brief time I've spent in front of both sets, it's clear that both offer state-of-the-art picture quality with impressively deep blacks and vibrant colors that seem to jump off the screen.

We're looking forward to getting some of the first OLED TVs into our labs for testing later this year.

Check out the rest of our CES 2013 coverage.