CES 2013: With Trakdot, lost luggage can e-mail or text you its location 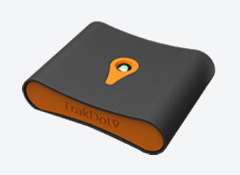 A device like Trakdot Luggage was inevitable: With gadgets out there that find lost pets and children, it was just a matter of time before there was one to locate lost luggage.

Just introduced at CES by GlobaTrac, the small device sits inside luggage until the plane lands, then reports its location (hopefully the same as your destination) via e-mail or text message. You can also find out your luggage's whereabouts using a mobile device on which you've installed a GlobaTrac mobile app.

From the information of GlobaTrac's site, it's not clear if you can pinpoint the location of lost luggage more precisely than which city it is in. And GlobaTrac says that the device won't trigger problems with airport security. However, the device may not be able to communicate from within all-metal luggage. And if something goes wrong, there's no repair service.

Trakdot uses two alkaline AA batteries, which you need to replace periodically. It will work with all cellular phones and multiple phones, provided you have wireless service at your destination.

When I searched for a nearby dealer on GlobaTrac's site, the only one in the U.S. was GlobaTrac itself, in Los Angeles. The rest were in Canada. And although GlobaTrac's site includes links to Apple's App Store and the Google Play store, I couldn't easily find the company's mobile apps in either store.

Check out the rest of our CES 2013 coverage.