New Toyota RAV4's headlight switch design is not so bright 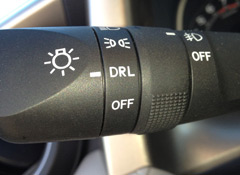 Toyota's redesigned 2013 RAV4 small SUV has many nice qualities and one head-scratching quirk: Daytime Running Lights that don't automatically run in the daytime.

A simple safety measure, daytime running lights (DRLs) make cars more visible during the day by illuminating their low-beam headlights at reduced power. In most vehicles, this happens automatically, with no input from the driver. (See our Toyota RAV4 first drive.)

In fact, very few cars that are equipped with DRLs provide a way to turn them off and if so, the preference is usually set through an on-board computer menu. However, the new RAV4 has a headlight switch that practically guarantees your DRLs are off. It is a rotary knob on the end of the turn-signal stalk with four positions: Off, DRL, parking lights, and low beams.

The problem is: If you want to use your daytime running lights, you have to take the trouble to switch them on. Virtually every other car thus equipped illuminates its DRLs by default. 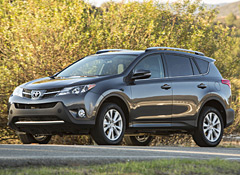 Here's the typical scenario: You drive at night with your headlights on, then park the car and turn off the headlights (because they don't shut off by themselves). The next day, you end up driving with DRLs off unless you made a conscious decision to turn the switch to the DRL position. I think that's confusing and an unrealistic expectation.

Other Toyota and Lexus products also have the potential to run with DRLs off, but it's less likely. They have an Auto mode and a DRL-off selection as part of their headlight-control switch. That's slightly better because the DRLs come on when the switch is in Auto mode, which it can remain in indefinitely. Even those owners may not be aware that when they drive with the headlight switch off, that their DRLs are off as well.

Consumer Reports is a proponent of daytime running lights, and we give scoring credit to vehicles that have them in our road tests. In addition, some insurance companies give premium discounts for cars equipped with DRLs. We may have to rethink how to adjust for such "optional" DRLs or a default mode that essentially means cancelled DRLs. We think insurance companies should take note of this.

Toyota reps we've spoke with say that there are instances where one would want to have headlights off, like when entering a military base. For that matter, there could be a button elsewhere that defeats DRL. Or even simpler, as soon as you shift into Park, let the headlights turn off.

Ultimately, the onus is on Toyota to redesign their headlight switch in a way that no one can inadvertently cancel their DRLs.