Nintendo TVii reviewed: Turn your Wii U into an entertainment hub 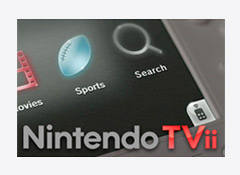 Did you or your kids get a Wii U for the holidays? Nintendo TVii—the streaming-video service promised for the new gaming console that wasn't quite ready at launch—is a very good reason your Wii U should be in the living room instead of the basement, though it definitely has room to grow.

Getting started. Nintendo TVii wants be the central hub of your video-watching experience and to add a social aspect to watching TV and movies. You begin with a simple setup: Enter your ZIP code, cable provider, and channel package, and Nintendo TVii populates with available TV shows and movies. You can personalize TVii by adding your favorite TV shows, movies, sports teams, and television channels. Finally, you add your social networks, including Facebook, Twitter, and of course Nintendo's own Miiverse.

How it works. In essence, the Wii U's tablet-like GamePad controller replaces most of your home-theater remote controls. Press the Remote icon on the touch screen of the GamePad, and a circular, rotary-style "remote" appears in the screen's lower-right corner. The outer portion of the wheel has quick links to your favorite channels. Depending on how many you've added, you'll have to rotate the wheel to access all of them.

Simply tap the channel you want to watch, and the GamePad sets your cable box to that channel. (If you were playing a game on the Wii U, you'll get a reminder to change the input on your TV.) The center portion of the on-screen remote displays the main controls you would expect, including Channel, Volume, Input Selection, and Guide. It also shows DVR controls, but they aren't functional yet: Once Nintendo TVii receives that update, you will be able to use your GamePad to control every aspect of your television.

Extra fun. One of the best features of Nintendo TVii is that you can browse through TV shows and movies on your GamePad's screen while you're watching something else. The GamePad is broken down into categories for sports, TV and movies. If you select TV, Movies, or Favorites, you'll get a secondary group of categories—Featured, Live, Recommended, and Grid. Featured and Recommended seem to give similar options, but this will probably change as you program more of your favorite shows. Grid is a more traditional TV channel guide, and Live lets you scroll through TV shows that are currently on.

Use any of the categories and select any TV show or movie, and TVii brings you information such as cast info and movie ratings. It also displays options for viewing your selection, the next time that show or movie will be live on television, along with which streaming media services currently offer it. A social aspect to watching TV shows and movies but is promised but not yet unavailable.

Sports is the most expansive of the services that are available now. Currently, you can watch NFL, NBA, NCAA Football, and basketball games. Choosing NFL shows you a grid of games that are on or will be on, along with the scores. On the left of the GamePad is an overhead view of the field, and on the right is a running play-by-play, where you can comment and read comments other viewers have made. You can also get team and player stats on the fly.

Bottom line. TVii has room for improvement—which will happen as the service evolves, and missing features appear. And we'd like to see more personalization options: For example, a way to rate shows, as you can on Netflix, so TVii could learn your preferences more specifically.

But overall, Nintendo TVii is a terrific service that could position the Wii U as the center of your home entertainment—a similar goal to that of competitor game consoles Microsoft Xbox and Sony PlayStation. With the GamePad as a multi-purpose remote, it even goes those services one better—though the PlayStation trumps the others with its built-in Blu-ray player.