5 toaster features that are the best thing since sliced bread 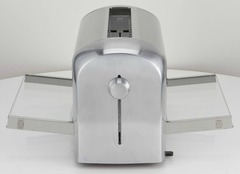 The basic mechanics of the pop-up toaster haven't changed much since its invention nearly a century ago. Most models feature the same vertical slots with heating elements on either side that slowly toast the bread. In the absence of any game-changing technologies, manufacturers have tried to differentiate their products with convenience features and design flourishes. Here are five improvements we've seen through decades of toaster testing at Consumer Reports.

Special settings. Toasters used to have two settings: on and off. But manufacturers have added a bit more nuance to the mechanics, for example bagel settings that only toast the cut side of the bagel, a defrost option for dealing with frozen items, and a reheat setting. Recommended models in our toaster tests offer these features.

Clearer controls. Some of the best models have easy-to-use touchpad controls, which are an improvement on the imprecise shade dials of old. We're also seeing more LCD displays with a countdown feature that tells you how long until your toast pops.

Motorized lifts. A few new models, including recommended toasters from Breville and Cuisinart, have done away with the traditional push lever, in favor of a motorized lift that automatically lowers and raises bread. Not that anyone ever sprained a figure pushing a toaster lever, but the automation is a nice convenience. Plus it gives the toaster a more streamlined appearance.

See-through walls. If you're picky about the doneness of your toast, being able to watch it turn brown through transparent walls is a worthwhile feature. But don't ignore overall performance. The Magimix Vision Toaster did a very good job toasting in our tests, but not the see-through Nostalgia Electrics RWT500CHR.

Sleeker designs. Our Ratings don't consider style, but we have noticed improvements in the look of toasters, important given their prominent place on the countertop. Stainless steel and brushed die-cast metal housings give toasters a serious industrial look. KitchenAid's Pro Line toasters are among the most eye-catching toasters we've seen in years.

View and compare all Toasters ratings.