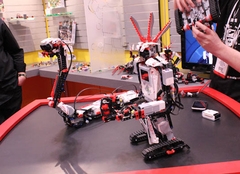 Toy Fair is always magical, but technology is adding even more magic to the mix, especially when it's implemented to make toys smarter and more fun. This year we saw some excellent examples of tech-toy coolness to come, from giants like Mattel but also from innovative companies you may not have heard of—yet.

Mattel is particularly adept at thinking up creative tech toys. This year we loved its Fisher-Price line, particularly the Imaginext Apptivity Fortress ($50, coming this fall). This toy combines the physical with the digital in a seamlessly fun way: You slot an iPad into the fortress wall and it becomes part of the play, via a free downloadable app. Our favorite was a troll-shooting game that takes place on the iPad screen, and also incorporates the real-life background (put Mom back there and save her from the trolls!). Find out more about augmented reality.

Bonus Top Toy: Mattel also has a great Barbie offering this year, the Barbie Digital Makeover Mirror ($70, fall), which uses an iPad in a frame. The tablet's camera is on your kid as she experiments with eye-shadow, blush, and lipstick—virtually, so cleanup-free. Facial-recognition technology built into the toy's free app tracks the made-up mug, so your digital makeup travels with you as you move around.

NeuroSky's wow-factor toys go to another tech extreme: They work via your brain activity. The company has serious products but also some very cool toys: One is Necomimi ($70, out now), cat-like fuzzy ears attached to a brainwave sensor that move according to your mood. Another is the Puzzlebox Orbit ($190, out now), a levitating sphere that you can fly and control via a NeuroSky MindWave headset and mobile device, by focusing or relaxing your attention.

Little Bits offers kits ($30 to $150) containing pre-assembled color-coded circuit boards, over 50 in all, that you can easily clip together with tiny magnets to create an actual working circuit: Some provide power, others perform actions, other are light sensors. What makes your cell phone vibrate? Little Bits can show you.

If it all sounds a bit geeky, it is, but it's so much fun too. We really appreciate any toy that gets kids to play and to learn about science and technology at the same time. Beyond offering the Little Bits circuit boards, the company is coming out with kits to build specific projects, which might take it beyond the nerds to the mainstream. We're rooting for them!

Lego has added to its Mindstorms robot-building line with the third iteration, EV3 ($350, second half of 2013). This version has been made more accessible: Kids (or grownup fans) can build a working robot pretty much out of the box; you'll be able to build 17 different models. But anyone who wants to go further with programming and design can do that too. The new MindStorms robots have remarkable movement (note the striking snake!) and look very, very cool. They also work with smart devices, using them as gesture controllers for example.

U.K. company Wow! Stuff's Combat Creatures are battling bots that bring Rock 'em Sock 'em Robots into the 21st century. The spiderish remote-controlled Attacknids (U.S. price and ship date to come) can swiftly scuttle in any direction, firing various projectiles as they go. Hit the right spot, and you can knock their legs off or even disable them completely. For just plain fun, it's hard to beat these creatures.