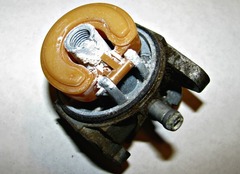 The Environmental Protection Agency has approved gasoline with 15 percent ethanol for use in cars year 2001 or newer, yet it prohibits its use in mowers and other power equipment, stating it may cause damage. A Department of Energy study found that E15 caused hotter operating temperatures, erratic running, and engine-part failure. But even gas with the usual 10 percent ethanol (E10) could help destroy small engines.

"Ethanol has inherent properties that can cause corrosion of metal parts, including carburetors, degradation of plastic and rubber components, harder starting, and reduced engine life," says Marv Klowak, global vice president of research and development for Briggs & Stratton, the largest manufacturer of small engines. "The higher the ethanol content, the more acute the effects." Servicing dealers are reporting similar problems, even with E10, according to the Outdoor Power Equipment Institute, the industry's trade group.

The OPEI also claims that proposed warnings at pumps are insufficient and that customers will blame equipment makers should mowers and other outdoor gear fail from being accidentally fueled with E15 gasoline. Using gasoline with more than the usual 10-percent ethanol has long voided most small-engine warranties but, until recently, the chance of doing so has been minimal.

Fuel additives such as Sta-Bil are now claimed to protect engines from ethanol by preventing it from settling out of the gasoline, attracting moisture, and concentrating its corrosive effects; we have not yet tested those additives. Here are other ways to protect your equipment:

For this season, Consumer Reports has updated its Ratings and recommendations for lawn mowers, string trimmers and leaf blowers. We also talked to some landscapers about the new trend in cutting back on your lawn and your yard work. The before and after photos may give you some ideas for your own property.