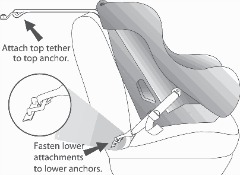 Parents need to catch up to the safety advances in car seats and learn how to install them correctly, according to a study released this week by the Insurance Institute for Highway Safety. Although all vehicles and car seats made since 2002 come with an anchor and simple strap meant to keep a car seat from tipping forward, the safety feature gets used just a little more than half the time. Consumer Reports' dynamic testing of car seats clearly shows that using the strap for forward-facing child restraints significantly reduces the potential for injury.

Unfortunately, this message is not getting across to parents and caregivers. In its survey, the IIHS looked at 479 vehicles that included a forward-facing child restraint in suburban areas across the country. It found that the top tether and anchor was used only 56 percent of the time. Although this is an improvement over previous studies, it's still far from a best practice. Parents gave the following reasons for not using the top tether and anchor:

The reasons don't come as a surprise to us. The top tether is a key part of the LATCH system (Lower Anchors and Tethers for Children) that enables car seats to be installed more easily and more securely. While the lower anchors, which fasten the car seat to the vehicle seat, are typically used more often, the top tether anchor is often ignored. One reason may be that the tethers are not required for installation of rear-facing seats so when a child is ready to face forward, the strap isn't considered necessary. Another is that the anchor is in different locations or may be difficult to identify or find in different vehicles. In sedans the top tethers are typically located on the rear shelf but they may not be as easy to find in SUVs, hatchbacks or minivans where they may be on the seat back, in the floor, ceiling or under the seat.

In the survey, the IIHS found that when the top tethers were used, 31 percent were installed incorrectly. The most common mistakes involved loose straps, incorrect routing and twisted straps. One of four drivers in the study admitted that they had trouble using the tethers. That's why we recommend that you always read the owner's manual for both your car seat and your car. Another place to get help is at a child safety checkpoint; to find an event check safekids.org.

Based on our car seat tests, we believe that top tethers should be used for all forward-facing child seats whether the seat is installed using the lower anchors or the vehicle's seat belts.