Will the Panasonic ZT60 be the 'ultimate' plasma TV? 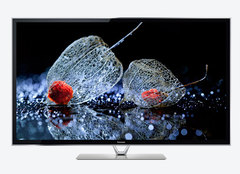 Last year, Panasonic's VT50-series plasma TVs were the favorite TV sets among many of our testers and editors, thanks to excellent picture quality, deep, inky blacks, and very accurate colors. They also had the typical plasma attributes—excellent motion performance and unlimited viewing angles—we've come to love.

While the company's 2013 TV lineup includes a direct replacement (the VT60) for last year's flagship series, Panasonic will also offer an even more premium, limited-edition plasma series, called the ZT60, in 60- and 65-inch screen sizes.

Like the VT60 sets, the ZT60-series models are full-featured smart TVs with all the company's bells and whistles, including a new customizable home page, Swipe and Share 2.0 (which lets you flick content back and forth from the TV to a mobile device using a finger swipe), and voice interaction. While prices weren't announced for the ZT60, we expect you'll pay about $500 more for a ZT-series set than the similar-sized VT60 model. (The 60-inch TC-P60VT60 models will sell for $3,000)

During the press event, we were able to get a short look at the ZT60 set in action, where it was paired against the TV that many reviewers—including Consumer Reports—think set the bar for black-level performance: the Pioneer Kuro Elite 151FD, which for a few years served as one of CR's reference TVs.

Based on my brief evaluation of the two sets, the ZT60 compared favorably in that respect, with deep rich blacks; it looked like it did a slightly better job at revealing shadow details. But it appeared that the ZT60 had less video noise and better motion performance, and it was free from the slight phosphor trails that were visible on the edges of objects in some faster-moving scenes on the Pioneer.

The ZT60 sets use a different panel than the VT60 models—it's called the "Studio Master Panel"—and it employs both new panel-driving circuitry and a new panel structure where the air gap between the front glass layer and the panel itself is eliminated, purportedly improving light transmission through the panel and minimizing reflections from external light to boost blacks and contrast. Like the VT60-series sets, the ZT60 models use a newly developed red phosphor that produces truer reds and a wider color gamut, according to the company. In a side-to-side comparison with last year's VT50 model, the new VT60's reds were, well, redder, making the older model's reds look a tinge orange.

The bad news for plasma fans is Panasonic confirmed that it will no longer develop new plasma panels at its R&D labs, as those resources will now be committed to OLED TV development. So the ZT60s may be the best plasma TVs you'll ever be able to buy, at least from Panasonic. That does not mean, however, that Panasonic is pulling the plug on its plasma TV busness—it will continue selling plasma TVs for the foreseeable future. [Note: Following several reports about the company's plasma R&D facilities closing, Panasonic issued this statement: "While the Smart VIERA ZT Series introduces a new level of plasma picture quality, we believe there is still room for further improvement and intend to continue to research ways to take our plasma technology to even higher levels where it also has the potential to be applied in our other Plasma series in the future."-Ed.]

What's also interesting to us is that during our meeting with Samsung earlier this year, executives told us the best picture quality available from that company this year (excepting its $40,000 Ultra HD TV) will be from its new F8500 plasma series, not from any of the LED-backlit LCDs the company is probably better known for.

As plasma fans ourselves, we're really looking forward to getting Panasonic's VT and ZT models, as well as Samsung F8500 TVs, into our labs for thorough testing to see if 2013 is really the year of the "ultimate" plasma TV.