Is tap water safer than bottled? 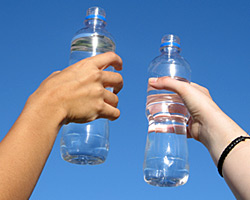 Score one for the green movement. For years as sales of bottled water climbed, environmental groups said it was likely less safe than tap water even without taking into consideration the impact on the enviroment. This week the government agreed. A study released by the General Accounting Office said that bottled water undergoes less scrutiny than tap water, which must meet a tougher safety standard. The GAO study found that the regulation of bottled water (under the Food and Drug Administration's Food, Drug, and Cosmetic Act) is less strict than the Environmental Protection Agency's regulation of tap water (under the Safe Drinking Water Act).

This news came during a House subcommittee hearing in which John Stephenson of the GAO told the House panel that when it comes to water, the FDA lacks the regulatory authority of the EPA.

In fact, bottled water makers are not required to disclose even as much information as your local municipality. If you live in a city of 10,000 residents or more, you probably receive a copy of a water report each year. The Safe Drinking Water Act requires that public water systems test tap water for various contaminants using certified laboratories and issue a water-quality report, called the consumer-confidence report (CCR), once a year.  (For particularly toxic contaminants, the SDWA requires results to be reported within 24 hours.)  The CCR summarizes local drinking water quality, information about the water source, levels of detected contaminants, whether any of the detected contaminants exceed federal levels, as well as information on the potential health effects of certain contaminants. (If you live in a smaller town, consult the EPA's Web site.)

In contrast, bottled water manufacturers don't have to use certified laboratories nor report the results of any water quality testing to the FDA, even if the contaminants exceed federal standards. The GAO study also found that only a small percentage of the 83 bottled water labels looked at, companies contacted, or company Web sites reviewed contained information comparable to that required of tap water.

In addition, SDWA has set standards for acceptable levels of the plasticizer DEHP (a chemical widely used in the manufacture of polyvinyl chloride plastics), which is an endocrine-disrupting compound banned in children's products.  The FDA, on the other hand, still has not set a standard for DEHP in bottled water.

In 2000, when Consumer Reports last tested bottled water, we found it to be safe when it met FDA standards.  There were some disturbing findings, however.  Eight of 10 five-gallon polycarbonate jugs we tested left residues of BPA, another endocrine disrupting chemical that we think should be banned from use in children's products, as some states have done.  All tested bottled water brands met the then-current EPA and FDA arsenic standard of 50 parts per billion (ppb), but two exceeded the EPA's new 10 ppb standard, effective in 2006.  We also reviewed 25 CCR reports and found that 22 of them reported some contaminants such as lead, chlorine and E. coli.  Indeed, some water samples from Boston had lead levels 45 times higher than the federal limit.

The bottom line is that bottled water is not necessarily safer than tap water.  We think that FDA should:

In the meantime, we recommend that consumers get a copy of their local CCR to see what the water quality issues are in their area. (How to decipher the report.)   If you want to test your own tap water, try calling the EPA's Safe Drinking Water Hotline (800-426-4791) for the names of state-certified testing labs or for your local health authority, which might offer low- or no-cost test kits, or check the EPA's Web site for listings.

Also testifying at the hearing was the president and CEO of the International Bottled Water Association who said that its code of practice for bottled water had testing and monitoring levels that exceeded FDA requirements. The IBWA followed up with a press release saying it was willing to work with the FDA to address the issues contained in the GAO report.  After the hearing, the House subcommittee sent letters to 13 bottled water companies requesting documents related to testing of bottled water and its sources, as well as lists of the names and locations of each company's water sources.-- Michael Hansen, Ph.D.