Sprouts recalled after 22 sickened by salmonella 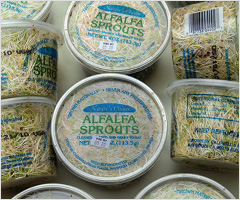 A California company is recalling alfalfa sprouts after 22 people in 10 states became sickened with Salmonella Newport. The sprouts were sold under the brand names Caldwell Fresh Foods, Nature's Choice, and California Exotics and distributed to restaurants, delicatessens and retailers nationwide including Walmart and Trader Joe's.

As of May 20 and since March 1, 2010, a total of 22 cases of Salmonella Newport infections have been confirmed in Arizona (1), California (11), Colorado (1), Idaho (1), Illinois (1), Missouri (1), New Mexico (1), Nevada (2), Oregon (1), and Wisconsin (2). Six of the cases required hospitalization including an infant in Oregon. No deaths have been reported, according to the Centers for Disease Control and Prevention.

Federal, state and local health authorities were able to pinpoint the cause of several illnesses after the patients reported eating sprouts at restaurants or eating sprouts purchased at retail outlets. The Food and Drug Administration and the California Department of Public Health are inspecting the Caldwell Fresh Foods facility in Maywood, CA and collecting samples. The firm is cooperating in the investigation and has recalled all of its alfalfa sprouts.

Because seeds and sprouted seeds are known to be a frequent cause of foodborne illness, the FDA has issued special guidance to sprout growers. The alfalfa sprouts in the recall are labeled and packaged as follows:
Lettuce Update
The CDC has issued an update on a recent recall by Freshway Foods of romaine lettuce tainted with e. coli. A total of 26 confirmed and seven probable illnesses related to the outbreak have been reported in five states (Michigan, New York, Ohio, Pennsylvania and Tennessee) since March 1, 2010. An investigation is continuing.