How about some heavy metals with that protein drink? 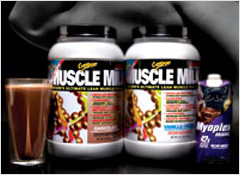 With bottles of some protein drinks displayed near the grocery checkout or lined up next to the soft drinks at your local convenience store, it's clear that they have gone mainstream. The products, sold as ready-to-drink liquids or powders that you mix into shakes, are being touted by some dietary supplement makers as a scientifically proven way to build muscles, shed unwanted pounds, get a quick energy jolt or even fight aging.


Though the promises are enticing, know the facts before you reach for what one sports nutrition expert describes as  "hope in a can."  Our recent investigation—including tests at an outside laboratory of 15 protein drinks, a review of government documents and interviews with health and fitness experts—found that most people already get enough protein, and some of the drinks can pose health risks, including exposure to potentially harmful heavy metals if consumed frequently.

All of the drinks in our tests had at least one sample containing one or more of these contaminants: arsenic, cadmium, lead and mercury. For most drinks we tested, levels were in the low to moderate range, when we could detect them. But with three of the products we tested, consumers who have three servings daily could be exposed to levels of one or two of these contaminants that exceed the maximum limits proposed by U.S. Pharmacopeia, the federally recognized authority that sets voluntary standards to cover dietary supplements.


Unfortunately, federal regulations do not generally require that protein drinks and other dietary supplements be tested before they are sold to ensure that they are safe, effective and free of contaminants. A just-released report on herbal dietary supplements conducted by the U.S. Government Accountability Office found that nearly all of the supplements it tested contained trace amounts of lead. Other heavy metals were also found in many products

The results of the GAO investigation were announced at a May 26 Senate hearing that examined concerns about the safety of such supplements and the misleading marketing and advertising used to sell them.  According to the hearing's official press release, at least 40 percent of American adults take dietary supplements. What's more, a 2005 study found that protein powders and shakes were the supplements most commonly used by those aged 12 to 18.

Chuck Bell, of Consumers Union, testifying at the hearing, said, "Unfortunately, in our research and reporting, we have found some very profound and troubling gaps in the system we have today to assure supplement safety."


"Consumers Union is concerned that the FDA is not providing adequate oversight of supplement contamination problems. We need to assure consumers that dietary supplements are consistently low in heavy metals and other forms of chemical or mineral contamination, and we should have zero tolerance for prescription drug contamination," he said.

Bell further testified that, "At a minimum, we believe that products should not exceed U.S. Pharmacopoeia limits for lead and other heavy metals. Because consumers do not expect to encounter heavy metal contamination in supplements, and many consumers may take multiple supplements or multiple doses of supplements, additional oversight may be needed to reduce hazards and warn consumers about unexpected health risks."