Wash and then wear; unwashed clothes may have formaldehyde 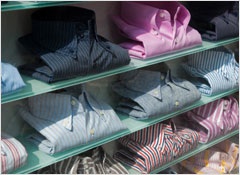 Buying new clothes can be exciting, and some people can't be bothered with the seemingly wasteful practice of washing new clothes before wearing them. But one Consumer Reports staffer who recently experienced headaches and a sore throat suspects that his impatience may be the cause. He wore his recent purchase before sending it for a spin in the washer to rid it of the chemicals commonly used to keep new clothes looking, well, new.

Substances like formaldehyde and many other allergenic compounds are used in fabrics for a variety of reasons, such as to help them resist wrinkles and shrinkage. Since just one wash can eliminate or reduce levels of a number of these substances (along with any wayward bug that might have come from the person who tried the shirt on before you!), it's a good idea to wash new clothes that will be worn against the skin before you put them on.

The U.S. doesn't regulate formaldehyde levels in clothing. But certain other countries do, and a recent report from the U.S. Government Accountability Office noted that levels in textile products they tested here in the U.S. met the most rigorous standards established elsewhere—about 75 parts per million for items that are in direct contact with the skin.

But that might not be enough for some people. By some estimates, about 9 percent of the U.S. population is so sensitive to formaldehyde that even low level exposures could be enough to set off an uncomfortable rash, or a severe allergic reaction. And a few items GAO tested did reach as high as 200 ppm. According to the GAO report, allergic contact dermatitis characteristic of formaldehyde exposure includes redness, swelling, blisters and flaky dry skin that can burn or itch.

Fortunately for our staffer, his symptoms were limited. Only a patch test will tell for certain if formaldehyde or other fabric treatments were the cause. Then again, it may just have been a reaction to shelling out cash for new duds.