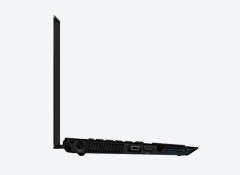 At Wednesday night's Consumer Electronics Show press conference for Sony, we were able to get our hands—and, more important, our eyes—on the company's new 3D-capable Vaio F Series laptop (previewed by CR earlier this week). We were able to view only a pre-loaded 3D video on the demo laptop made available in the booth, so these are just initial impressions based on a brief time spent with the computer.

Viewed through battery-powered active-shutter glasses, the images appeared sharp and the 3D effect was on par with most existing 3D TVs. Not surprising, considering these F series laptops can display in full 1080p. However, much like smaller TV screens, viewing 3D movies and images on a standard-size laptop screen may leave you wanting more.

The other issue is the aforementioned active-shutter glasses required for viewing 3D. Many people who use their laptops for watching movies do so while traveling, so these glasses are another thing you'll need to pack (and possibly lose or break). And at 16 inches, the F series laptops are nearly too large to sit comfortably on the laps or tray tables of passengers in coach seats.

Glasses and size weren't an issue, however, with two prototype devices Sony showed at the same event.

The first was a portable 3D disc player that uses glasses-free technology. It's also more compact than the 3D Vaio, making it a more reasonable travel companion. Unfortunately, the 3D effect was a far cry from the experience we've become accustomed to with TVs. It was hard to tell in such a busy, brightly lighted room, but the screens appeared to have very limited viewing angles.

The second prototype was a self-contained headset that creates a more immersive experience. While interesting—both the picture and sound were better than we would have expected from a prototype—the device is currently much too bulky and heavy to sit comfortably on one's face. It also requires each user to adjust the two small screens to their particular eyes.

Sony had no word on pricing or availability for these in-development products.