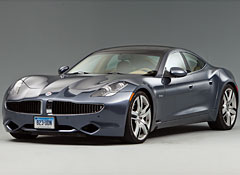 The striking Fisker Karma extended-range electric car has turned heads for months in our test program, from its distinctive design to its sci-fi hum soundtrack. During that time we've experienced far more than our share of frustrations. And in the final tally, the Karma scores a failing grade.

The Karma ranks as our lowest-rated luxury sedan. Of all sedans, only three have lower overall scores: Chrysler 200, Dodge Avenger, and Nissan Versa SV. (Learn how we test cars.)

As is often the case, a road test score that is too low to earn a Consumer Reports recommendation is caused by numerous shortcomings, not just a single or even few flaws. With the Karma, much attention has been paid to our unfortunately routine problems, including an early failure on our track that left the car immobile and led to the battery being replaced, frequent instrument, window and radio glitches, and recurring warning lights. So far our Karma has made multiple trips back to the dealer (who, by the way, has provided excellent service, flat-bedding the car to and from our facility). But problems with out particular test do not impact the score. Such problems only try our patience.

There are bigger issues here, compromises inherent in the car's basic design and execution. The Karma falls short with: poor dash controls, limited visibility, a cramped interior, awkward access into and out of the seats, an engine that is noisy when running, long battery recharge times, and a small backseat and trunk. The Karma's heavy, SUV-like weight affects agility and performance, and the Karma lacks the oomph you would expect.

Expectations are high with a car that retails for over $100,000. And this car fell well short.

In our November issue, we compared the Karma against the Porsche Panamera, another six-figure (as tested) elite car that Fisker says is the Karma's main competitor. While the Panamera doesn't bring the fuel economy benefits of the Karma, it trounces it everywhere else and bested the Karma by 27 points.

No question, the eye-catching Karma attracts tons of attention, regardless if the car is being driven by a teenaged pop star or not. And credit Fisker, as a small, start-up company, for bringing the Karma to market. It is a feat that many other firms have attempted and failed at, underscoring why the auto industry is dominated by massive, well-established global corporations. And it also highlights the risks to early adopters for leading-edge cars and technology.

Check out our video for more insights into this latest test, and see our Fisker Karma model page for the complete ratings and review.