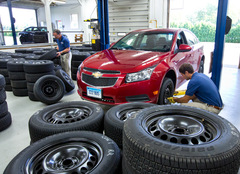 Consumers have a low level of satisfaction with run-flat tires versus more traditional tires, according to the research firm J.D. Power and Associates. These findings did not surprise us, though they serve as an important reminder for car shoppers who may be more focused on sheetmetal than rubber.

Released last month, the study looked at consumer satisfaction and experience with different types of tires. J.D. Powers found that customer satisfaction with run-flat and low-rolling resistance tires to be significantly lower than that for traditional tires. These tire types are increasingly common, as automakers strive to improve fuel economy.

The reasons and experiences behind the dissatisfaction tend to match our own, as well as the tires' inherent limitations. The J.D. Power report cited complaints of run-flats' premature or uneven wear in certain applications, a stiff ride, high replacement costs, and limited replacement choices—just like we've been warning consumers in our tire buying guide.

Our own experiences also point out that it may be difficult finding a direct replacement tire at any cost, like when we needed one for a BMW on a road trip. Some owners also say they want the added security of a spare tire; cars with run-flat systems don't usually have them even as an option. (Read "How to prepare for driving without a spare tire.")

Our take is that despite these notable limitations, run-flat tires can make sense for cars that don't have space for a spare tire. They do provide extended mobility, limiting your chances of being stranded in an unsafe area or having to change a flat in foul weather. And run-flats are a better solution than the sealant kits that now commonly replace a spare tire, allowing a temporary roadside fix to a small tread puncture. (But not a sidewall tear.) The key here is to know what you're getting when you buy a new or used car, and to understand the trade offs up front.

View and compare all Tires ratings.