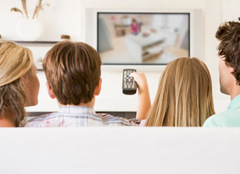 For many of us—especially those with kids—programming the DVR to record shows and movies until it's crammed to capacity is a regular ritual. But how many of those shows do you actually ever watch? Probably not as many as you think. According to a recent study by Motorola Mobility, those of us in the U.S. never watch 41 percent of the programs we record on our DVRs.

Certainly we're watching more TV than ever, though. U.S. couch potatoes lead the world by watching 23 hours of TV each week , supplemented by 6 hours of movies. People in Sweden and Japan must have other compelling distractions, as the 15 hours of TV and 2 hours of movies they view weekly were the least of the 17 countries surveyed.

We're also growing increasingly fond of the ability to record programs, the survey says. At the start of the TV season last fall, almost half of all U.S. homes (46 percent) had a DVR, a 30-percent bump from the previous year. According to the survey, 77 percent of the respondents used the DVR because another show they wanted to watch was airing at the same time, while 68 percent wanted to skip commercials.

Shopping for a new television? Check our TV buying guide and Ratings.

One conclusion of the study is that all this hoarding is ticking off DVR users, who are forced to delete shows to make room for newer ones. According to the survey, more than two-thirds of the respondents globally have had to delete content, and 79 percent say they're frustrated because they've run out of storage. But given the findings of the survey, perhaps the solution really isn't a bigger hard drive: It's that you should stop recording all those shows you'll know you never watch.

It should be noted that Motorola Mobility, now owned by Google, does have an oar in these waters: It sells not only cell phones and tablets, but also—yes-—set-top boxes and whole-home DVRs.

Related:
7 things you need to know about free video on demand
5 tips for cutting your cable bill